Week in a Glance: Busy Week Ahead as Petes Begin 3 in 3 on Thursday 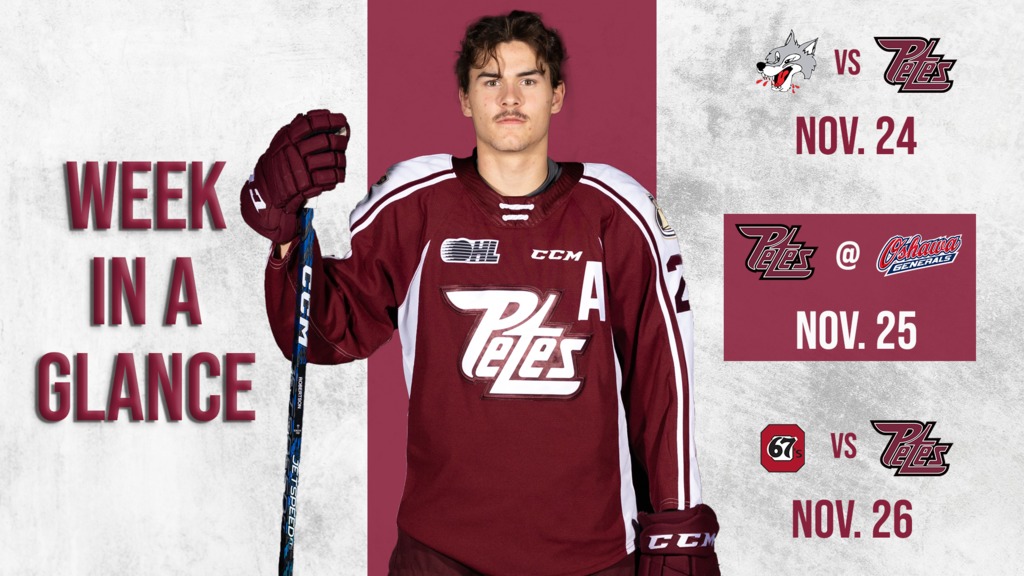 The Petes head into this week on fire after a 2-0 effort last week that saw them take down the Oshawa Generals and Mississauga Steelheads on consecutive nights. The two games saw the Petes outscore their opponents 11-3 over two games. Michael Simpson started both games for the Petes in net, leading to OHL Goaltender of the Week honours with a 2-0 record, .950 SV%, 1.50 GAA, and one shutout. The Petes will be in tough this week, with three games in three nights ending against the league leading Ottawa 67s on Saturday.

Make sure to wear blue as the Petes welcome the Sudbury Wolves to the PMC for Diabetes Night presented by Tandem Diabetes Care on Thursday. The night is a personal initiative for Petes goalie Michael Simpson, who lives with Type-1 diabetes. The game is in support of Diabetes Canada and all fundraising efforts, including chuck-a-puck and a game-worn Simpson jersey auction, will go towards sending local children with diabetes to D-Camp. The Wolves and Petes have met on one other occasion this season, with Sudbury coming out on top in overtime. The Petes will be looking for their third straight win, after defeating Oshawa and Mississauga last week.

Following Thursday night’s home game, the Petes will be on the road to take on the rival Oshawa Generals for the 2nd time in four games. The Petes have a 2-0 record against the Generals this season, outscoring them 7-1. The Petes will look to take advantage of a struggling Generals team who has not won in their last nine games. It should be a tough test for Oshawa, who has scored the second least goals in the OHL with 54 in 19 games. The Petes counter with the second best goals allowed record in the league, with 52 allowed in 21 games.

On Saturday, the Petes host the first place Ottawa 67s for Family Feud Night. There will be a non-perishable food drive in support of Kawartha Food Share before the game, so make sure to bring your items! Both intermissions will feature Family Feud style activations. The Petes will look to hand the 67s their second loss of the season, after giving them their first on October 28. Ottawa (1st) and the Petes (2nd) feature the two best defences in the OHL, having given up only 46 and 52 goals respectively,

Tickets to Thursday and Saturday’s games can be purchased at the PMC Box Office, or online by clicking here.

The Petes will host their annual Teddy Bear Toss game on December 1st against the Flint Firebirds. Get your tickets now by clicking here.