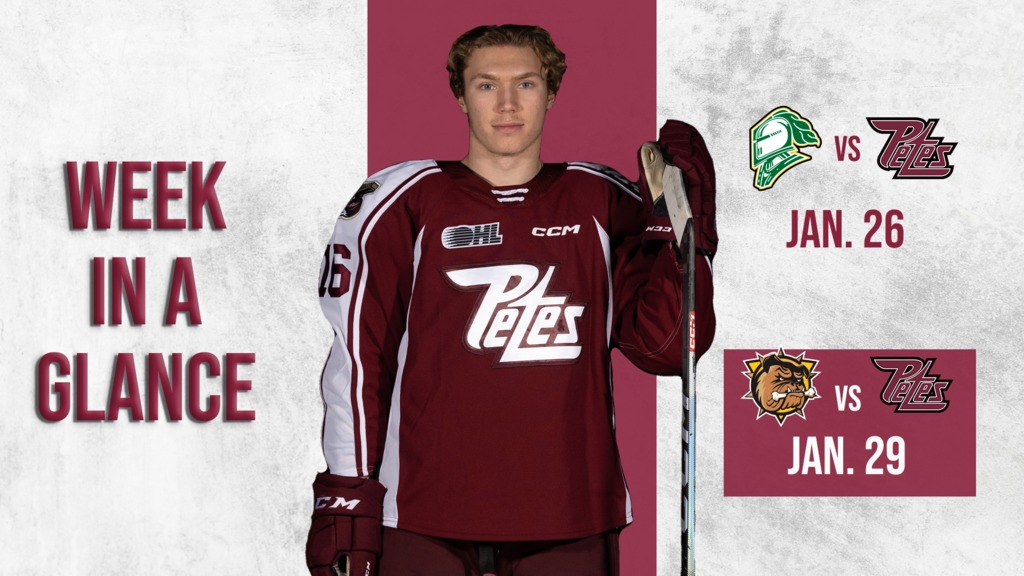 With a lighter schedule this week, the Petes will be looking to get back on track after four games last week saw them pick up only two of a possible eight points. With a game on Monday, then a three in three from Thursday to Saturday, fatigue most certainly played a part in Northern Ontario during the weekend. With two home games spread out over four days this week, a rested Petes team looks poised to climb the standings with four points on the line. Here is everything you need to know heading into this week:

The Petes host the London Knights for the first time since the 2019-20 season for Faith and Family night on Thursday. The Petes will also be recognizing Brian “BMan” Miller for his 2000th career game with a ceremony before the puck drops. The Knights have cooled down as of late, dropping four of their last six, moving them into second in the Western Conference. The Petes will be looking to bounce back with a win against London, after dropping three of four last week. London has leaned heavily on their OA duo of George Diaco and Sean McGurn to get their offence going this season. The Petes will need to shut down both of the 2002-born forwards to put themselves in a good position for a W. It is unknown at this point if London will be without their NHL draft prospects Oliver Bonk and Denver Barkey, who will both take part in the Kubota CHL Top Prospects game in BC on Wednesday night.

It’s a rare Sunday matinee matchup for the Petes at the PMC as they host the Hamilton Bulldogs at 2:05PM. There will be a ceremony recognizing long time off ice official Art Hopkinson before the game. Avery Hayes and Gavin White will both take on their former team, who they won an OHL Championship with last year, for the first time. Former Petes Nick Lardis and Sahil Panwar will travel back to the PMC for the first time since being traded to Hamilton. Both Lardis (8GP, 13P) and Panwar (8GP, 9P) have been on fire for the Bulldogs since the trade and will have something to prove on their return. Peterborough and Hamilton have faced off five times so far this season, with Hamilton’s only win coming in a shootout on November eighth.

Tickets to Thursday and Sunday’s games can be purchased at the PMC Box Office, or online by clicking here.