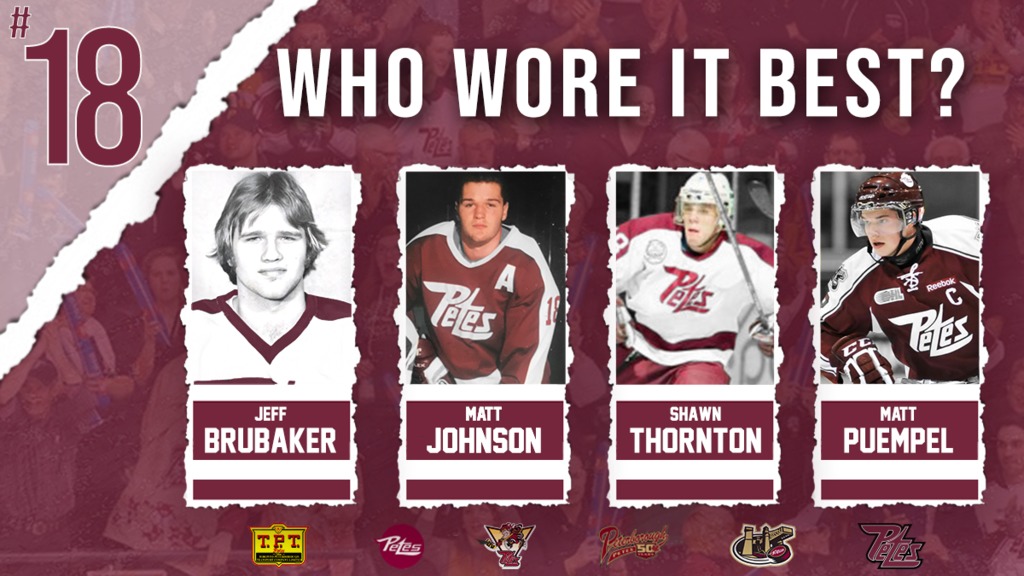 Some people claim that Jeff Brubaker is the toughest Peterborough Pete of all time. He played for the Petes from 1976-78 and in his second season, he had 307 PIMs alone, and 44 points. He won a J. Ross Robertson Cup with the Petes in 1978. He started his NHL career with the Hartford Whalers in 1979 and went on to play for the Montreal Canadiens, Calgary Flames, Toronto Maple Leafs, Edmonton Oilers, New York Rangers, and Detroit Red Wings. Brubaker began his coaching career in the ECHL with the 1989-90 Greensboro Monarchs, winning the league championship that same year.

Matt Johnson played for the Petes from 1992-95 and won a J. Ross Robertson Cup in his rookie season. He played parts of 10 seasons as an enforcer in the National Hockey League with the Los Angeles Kings, Atlanta Thrashers and the Minnesota Wild. He also appeared in 16 Stanley Cup playoff games.

Shawn Thornton is an Oshawa native who turned Pete. He played for the Petes for two seasons and was part of the infamous 1996 crew who were J. Ross Robertson Cup Champions and hosted the Memorial Cup in Peterborough. Notoriously tough and a fan favourite, he is a blue-collar player who loves proving people wrong. Do you know he was looked over in his 1996 draft year and was then selected by the Leafs in the 1997 NHL draft in the seventh round? He is 1 of only 4 players in NHL history with at least 600 games played in both the AHL and the NHL. He’s won two Stanley Cups; 2007 with the Anaheim Ducks and 2011 with the Boston Bruins. Today, he serves as the Vice President of Business Operations for the Florida Panthers.

Matt Puempel played for the Petes from 2009-2012 and was a captain in the 2011-12 season. In 2010, he won CHL Rookie of the Year. As a Pete, he registered 213 points in 195 games. He was selected 24th overall in the 2011 NHL Entry Draft, he has split his professional playing career between the AHL’s Binghamton Senators, Grand Rapids Griffins and NHL’s Ottawa Senators. He is currently playing in the SHL with the Malmo Redhawks.