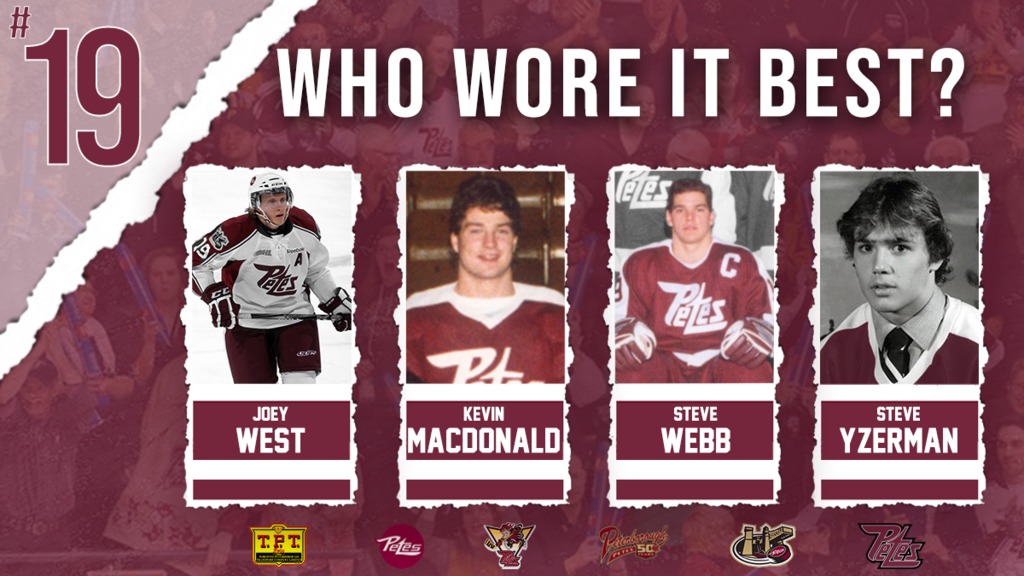 Joey West holds the record for most games ever played by a Pete: 326 games in total across five seasons. He went on to play for the Carleton University Ravens and currently plays professional hockey for the Amiens in France.

Kevin MacDonald donned number 19 right after Steve Yzerman left the Petes to join the Detroit Red Wings. He played for the Petes from 1983-87 and ranks fifth in the Petes’ record books with the most overall PIMs with 555 across four seasons. He went onto a significant career in the IHL and played for the Muskegon Lumberjacks, Phoenix Roadrunner and Chicago Wolves. He coached the Bakersfield Condors for three seasons.

Steve Webb played for the Petes from 1993-95 and was a captain in his final year. He was picked in the seventh round of the 1994 draft by the Buffalo Sabres. In his eight seasons in the NHL, he played for the New York Islanders and Pittsburgh Penguins. Webb was the recipient of the Bob Nystrom award in 2002 for the Islander that best exemplifies hard work, leadership, and dedication on and off the ice.

Steve Yzerman – where to start? He played centre for the Petes from 1981 to 1983. In his final season in Peterborough, he put away 91 points. He was drafted 4th overall to the Detroit Red in the 1983 NHL Entry Draft and became one of the organization’s most important players of all-time. Prior to the 1986–87 season, at age 21, Yzerman was named captain of the Red Wings and continuously served for the next two decades (dressing as captain for over 1,300 games), retiring as the longest-serving captain of any team in North American major league sports history. Yzerman led the Wings to five first-place regular season finishes and three Stanley Cup championships. He won; Lester B. Pearson Award (Most outstanding player) in the 1988–89 season, the Conn Smythe Trophy (Most Valuable Player of the Stanley Cup playoffs) in 1998, the Selke Trophy as the league’s best defensive forward in 2000 and the Bill Masterton Memorial Trophy for perseverance in 2003. He has medals from the World Junior Championships, World Cup, and Olympics. Most recently, he won General Manager of the Year with Tampa in 2015, he’s in the Hockey Hall of Fame (2009), and was named to the Order of Canada. He is currently Executive Vice President & General Manager of the Red Wings.