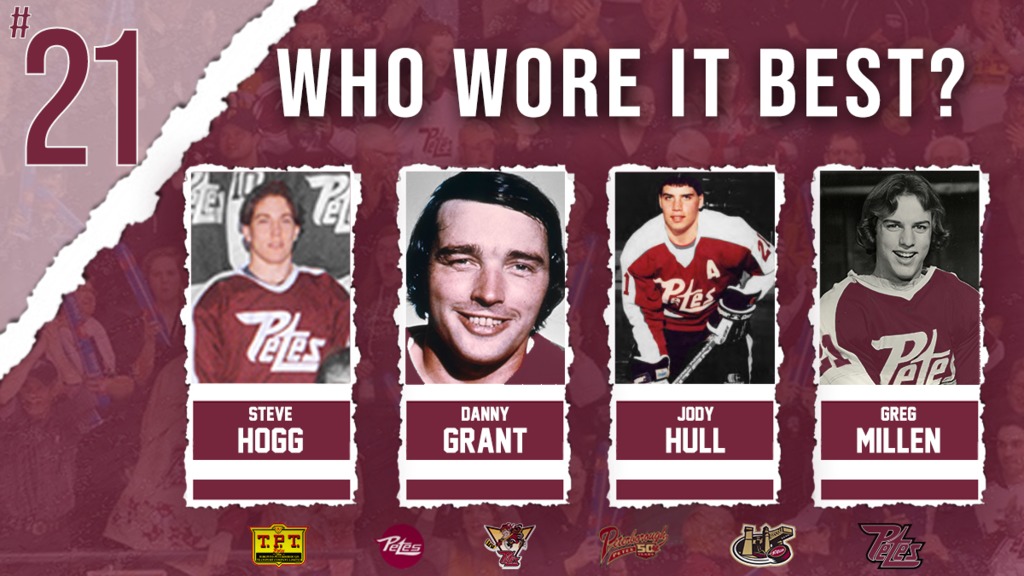 As we wrap up the celebration of the new year 2021, Petes fans are called to cast their vote to decide which Petes best represents their respective jersey number from 1 – 21 for the final time. Tell us who wore it best!

Steve Hogg is from Millbrook who played for the Petes for four seasons. He put up 75 assists in his final two seasons and won the J. Ross Robertson Cup in 1996. He was part of the team that saw the Memorial Cup hosted in Peterborough.

Danny Grant played for the Petes from 1962-66. He was a left-winger who played in the National Hockey League (NHL) for 14 seasons, most notably for the Minnesota North Stars. In his career, Grant notched 263 goals and 535 points while playing for the Montreal Canadiens, North Stars, Detroit Red Wings and the Los Angeles Kings. He also played in three All-Star Games. He won a Stanley Cup in 1968 and Calder Memorial Trophy winner in ’69. He’s originally from Fredericton, NB and was inducted into the NB Hall of Fame.

Jody Hull played for the Petes from 1985-88 and put 50 goals in the net in his final season. He won a gold medal with Team Canada at the 1988 World Junior Championship. Hull was drafted in the first round, 18th overall by the Hartford Whalers in the 1987 NHL Entry Draft. In addition to Hartford, Hull also played for the New York Rangers, Ottawa Senators, Florida Panthers, Tampa Bay Lightning and the Philadelphia Flyers between 1988 and 2004. He played 831 regular-season games in total, scoring 124 goals and 137 assists for 261 points and collecting 156 penalty minutes.

Greg Millen played for the Petes from 1974-77 and finished his OHA career with the Greyhounds (a team that happened to feature the Great One). He played for the Penguins in 1978-1979 for three seasons, then signed with Hartford in 198 and spent four seasons in the Hartford crease. In 1984, he was traded to the St. Louis Blues, continuing there for six years. His other NHL stops include Quebec, Chicago and Detroit amounting more than 600 appearances across 14 NHL seasons. He is currently a colour commentator for Hockey Night in Canada and Sportsnet.