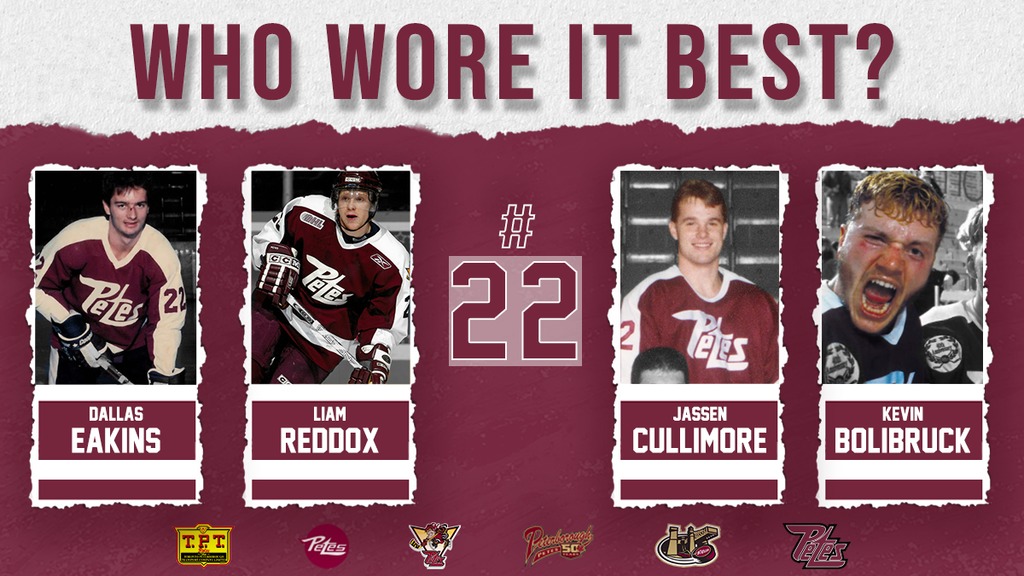 Due to popular demand, the Petes are excited to bring back Who Wore It Best? Every Wednesday, fans will have an opportunity to cast their vote to decide which Petes best represents their respective jersey number from 22 – 99.  The top four players to wear each number will be showcased every week and Petes fans will vote for who they believe wore it best!

Dallas Eakins played for the Petes from 1984-88. In his final season with the Petes, he rocked the C on his jersey, tallied 38 points as a defenceman and 129 penalty minutes. He is renowned by many people affiliated with the Petes as being one of the best leaders in maroon and white history. Today, Eakins serves as the Head Coach of the NHL’s Anaheim Ducks.

Liam Reddox is a Whitby native who spent four seasons with the Petes from 2002-06. Across his four seasons, he racked up 210 points with 74 of them coming from in 2006. Many point to Reddox’s grit and tenacity as being a huge factor in why the 2006 team had such immense statistical success. He was drafted by the Edmonton Oilers, 112th overall in the 2004 NHL Entry Draft. After being drafted, he spent most of his time in the AHL with the Springfield Falcons and was a fan favourite with the Belfast Giants in their 2019-20 campaign.

Jassen Cullimore started playing junior hockey when he was only 14 years old. The Port Dover native played for the Petes from 1988-92, alongside other Petes legends like Mike Harding, Brent Tully, and Dale McTavish. Cullimore was selected by the Vancouver Canucks in the 1991 NHL Entry Draft and spent three seasons in Vancouver, seven with the Tampa Bay Lightning where he won the Stanely Cup in 2004.

Kevin Bolibruck played for the Petes from 1994-97. Another high-point defenceman, the Peterborough native clinched 75 points across three seasons and earned a J. Ross Robertson Cup in his sophomore year with the Petes. Bolibruck was the captain of the Petes in his final year in the Patch, he went on to play six seasons in the AHL and was a staple with the Sheffield Steelers from 2009-11.

* To view the Who Wore It Best? winners and nominees from jersey #1-21, click here.