Who Wore It Best? Jersey #6 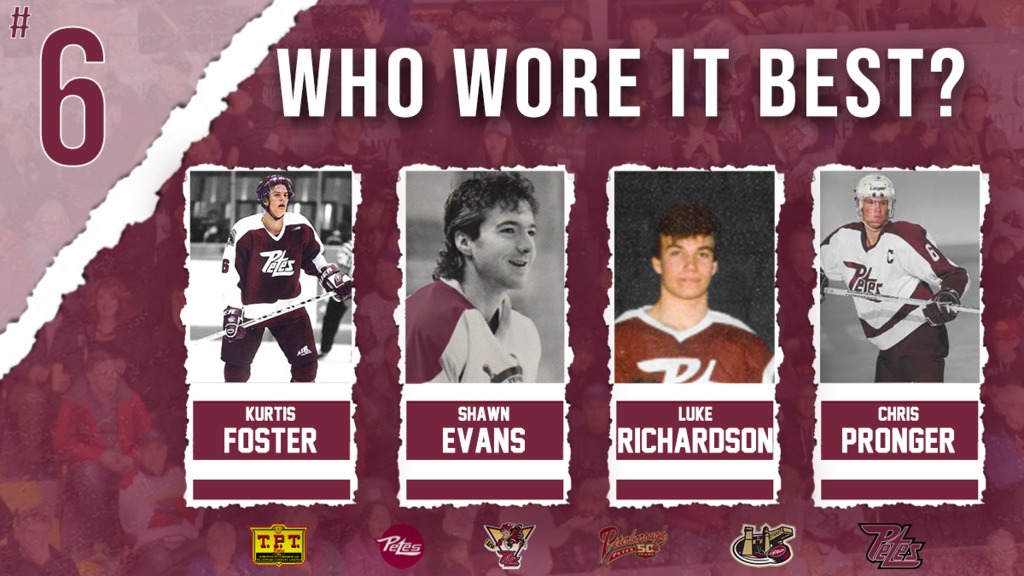 Kurtis Foster played for the Petes from 1997 – 2002. He was drafted in the second round of the 2000 NHL Entry Draft and his most significant stint in the NHL was with the Minnesota Wild from 2005-09.

Former defenceman Shawn Evans played for the Petes from 1982-85. In his three seasons, he racked up 212 assists! In 191 games as a Pete, Evans totalled 256 points to hold the all-time record for points by a defenceman and went on to spend a decade in the AHL and IHL. Today, he’s a General Manager and Coach of the JR. A Truro Bearcats.

Luke Richardson played for the Petes from 1985-87 and represented Canada at the 1987 World Junior Championship. He was drafted 7th overall by the Toronto Maple Leafs in the 1987 NHL Entry Draft and spent 21 years playing in the NHL, suiting up for the Leafs, Edmonton Oilers, Philadelphia Flyers, Columbus Blue Jackets, Tampa Bay Lightning and Ottawa Senators. Today he is an Assistant Coach with the Montreal Canadiens.

Chris Pronger is a Hall of Fame defenceman who spent two seasons with the Petes from 1991-93. He won a gold medal with Team Canada at the 1993 World Junior Championship and was a significant factor in the Petes winning the J. Ross Robertson Cup in 1993. Jeff Twohey jokes, “Petes developed Pronger’s stamina, ‘We would open the door and put him out for 40 minutes.’”