Who Wore It Best? Jersey #7 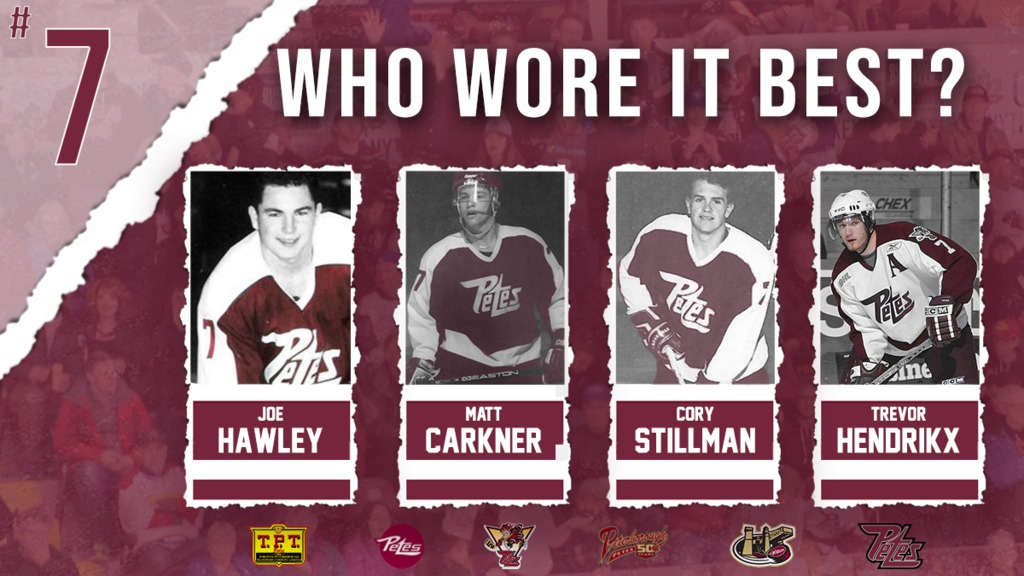 Local boy Joe Hawley was a huge leader with the Petes in the late ’80s, a centreman with some of the team’s most stacked rosters. He scored 193 points in 241 games across four seasons with the Petes.

Matt Carkner was the captain of the Petes as the team rang in the new millenniums. He was a defenceman and much like Hendrikx, he was mean on the ice (1 minute shy of having 600 PIMS over 4 seasons). He played for the Ottawa Senators for four seasons and is currently an Assistant Coach with the AHL’s Bridgeport Tigers.

Cory Stillman, a Peterborough lad, only played for the Petes for a single season but he is attributed as being a HUGE factor in why the Petes were able to win the J. Ross Robertson Cup in 1993 as he notched 80 points in 61 games. He was selected 6th overall in the first round by the Calgary Flames and is one of the fewest players in the NHL to win back-to-back Stanley Cups, won with the Tampa Bay Lightning in 2004 and the Carolina Hurricanes in 2006 (2005 was a lockout). In December 2020, Stillman was hired as an Assistant Coach for the Arizona Coyotes.

Trevor Hendrikx played for the club’s most statistically successful team (went 47-16-0-5) outside winning a Memorial Cup with the 2005-06 team. He was notoriously tough and had 123 PIMs during that season. He had a long tenure in the ECHL and played two seasons with the Cardiff Devils.