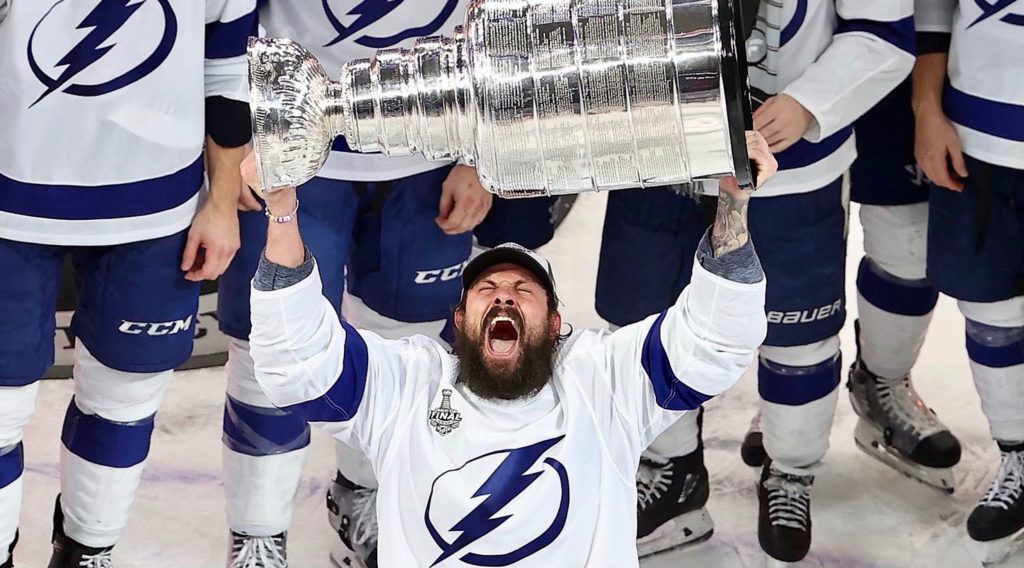 Many Petes fans were watching the bubble hockey intensely, but without any real motivation to cheer for any one team in particular. Before game six, the Petes laid out several reasons to cheer for the Stars, and these reasons will hold true for future seasons.

On the surface, you may be thinking “wait, why would we not cheer for Tampa Bay?” Petes alumnus Zach Bogosian is a name you’ll be hearing throughout the broadcasts, and whose name will be all over the box scores in the series. Bogosian as a defenceman for the Tampa Bay Lightning who has logged key minutes for the Bolts, and for his sake, the all of Petes nation are absolutely ok with Tampa hoisting the Cup this week.

“Bogo-Cop” played for the Petes from 2006-08 before being drafted third overall in the 2008 NHL Entry Draft (Atlanta). The Petes picked him up with the 19th overall pick in the 2006 OHL Priority Selection, and only three other players from that OHL draft have played as many NHL seasons (12) as Bogosian. You might have heard of them: Steve Stamkos (Sarnia, 1st overall), Alex Pietrangelo (Mississauga, 3rd overall), and Wayne Simmonds (Owen Sound, 114th overall – stick tap to Owen Sound’s scouts!).

Fun Fact : Incredibly the last time Zach Bogosian played a playoff game was 2008 as the @PetesOHLhockey were knocked out in 5 games by The Belleville Bulls. Great to see him with the @TBLightning . #NHLPlayoffs #NHL pic.twitter.com/g6RmTAagVi

So, Petes fans, we’re happy that Bogosian and his Lightning lifted the cup, but we’re here to tell you about three people behind the scenes who have built the Dallas Stars, top to bottom.

Petes alumni Paul McIntosh, Jimmy Johnston, and Shane Turner are all scouts for Dallas, and their collective fingerprints are all over the Stars’ roster.

McIntosh (1971-74) is the Head Professional Scout with the Stars. A professional scout advises the General Manager and other front office executives on trade and free agency potential of professional players not in the team’s system. In other words, McIntosh and his staff need to be experts on every player that the Stars could acquire to help the team, and with the success Dallas has had in the trade and free agency market, clearly McIntosh is performing at an elite level. 17 of Dallas’ 31 playoff rostered players arrived via trade and free agency, including both of the team’s netminders, and key cogs like Corey Perry (ahem, Peterborough native Corey Perry . . . did someone say #PetesMafia?).

On the other side of the Scout table at the annual Dallas Stars Holiday Party are the amateur scouts, who evaluate and eventually advise on the selection of players in the annual NHL Entry Draft (and subsequent amateur tryout and signing process). Petes alumni Jimmy Johnston (1970-73) and Shane Turner (former Petes scout). Dallas has hit the draft jackpot on a number of occasions, thanks at least in small part to Johnston and Turner’s work, with players like team captain Jamie Benn (129th overall) leading the charge.

The three scouts have a combined 49 years experience with the Stars, so a shot at the Stanley Cup is well deserved for McIntosh (hired in 2001-02), Johnston (’03-04) and Turner (’07-08). Dallas has not won a Cup since Petes alumnus, hockey hall of famer, and current Board Advisor Bob Gainey guided them to the 1998-99 championship (and subsequent Finals appearance in 1999-00).

If these reasons alone don’t sway you, consider this: the Oshawa Generals – Peterborough’s oldest and biggest rival – have one alumnus participating in the Stanley Cup Finals (Anthony Cirelli of the lightning), and the entire city of Oshawa threw thrown their support behind the Bolts.

Congratulations to Bogosian and the Tampa Bay Lightning for winning the cup, and for the entire Stars organization for another Finals appearance to add to their storied history.