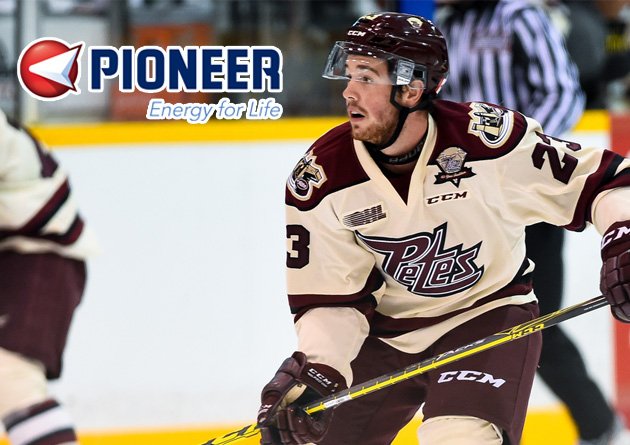 Toronto, ON – The Ontario Hockey League today announced that forward Hunter Garlent of the Peterborough Petes is the Pioneer Energy OHL Player of the Week for the week ending October 11 after leading the league with eight points in three games scoring twice with six assists and a plus-minus rating of plus-7.

Garlent helped the Petes grab four of a possible six points on their West Division road trip lifting the club into a first place tie in the OHL’s Eastern Conference standings with 10 points.  Held without a point in the Petes’ 4-1 loss to the Windsor Spitfires on Thursday, Garlent rebounded with a goal and two assists on Saturday in a 7-2 victory over the Saginaw Spirit.  Then on Sunday, Garlent matched his career-high with a five-point performance scoring once with four assists in a 6-4 win over the Flint Firebirds.

Garlent, a 20-year-old from Thorold, ON, is playing in his fifth career OHL season and third with the Petes after being a first round pick of the Guelph Storm in the 2011 OHL Priority Selection.  Currently tied for second in OHL scoring with 11 points in eight games, Garlent has now scored 70 goals and 123 assists for 193 points in 232 career OHL regular season games.

Also considered for the award was last week’s recipient Alex DeBrincat who scored four goals and two assists for six points in two games helping the Erie Otters stay undefeated with a perfect 6-0-0-0 record, and Dante Salituro who scored four goals and one assist for five points in three games helping the Ottawa 67’s extend their winning-streak to four.  In goal, Lucas Peressini of the Kingston Frontenacs posted a 2-0-0-0 record with a goals-against-average of 1.48 and save percentage of .955.