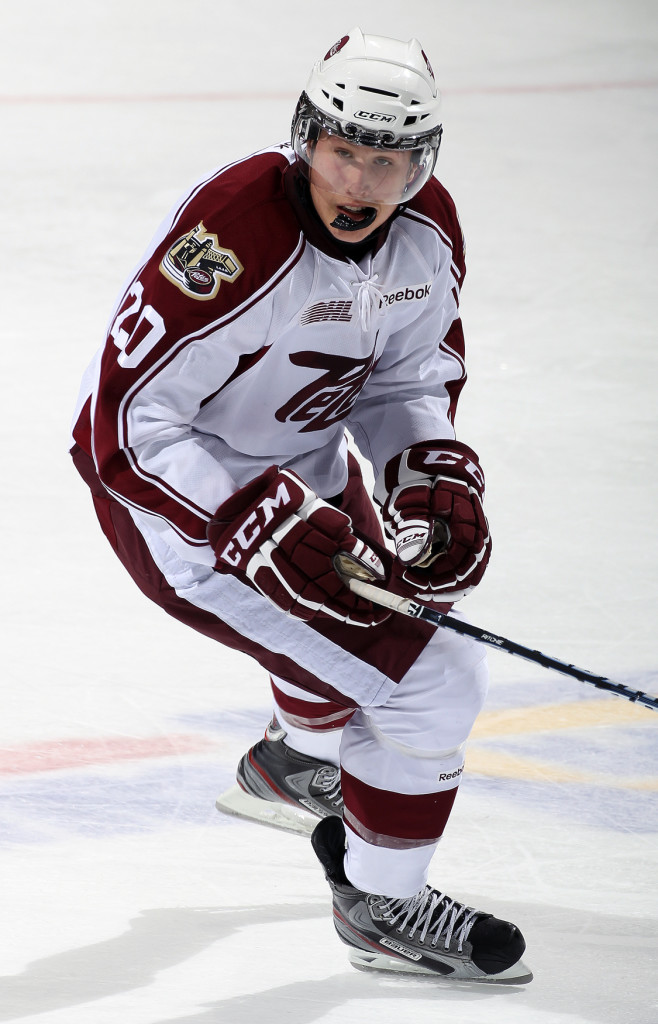 Growing up in Orangeville it was almost a given Nick Ritchie would play lacrosse.

The Toronto suburb is a lacrosse hotbed where the sport is held in the same reverence it is in Peterborough. The Orangeville Northmen are a junior A powerhouse and the minor lacrosse system a perennial contender at all levels.

Ritchie, the Peterborough Petes’ first-round draft pick, second-overall last May, and his brother Brett, who plays for the OHL’s Niagara IceDogs, were standouts in both hockey and lacrosse growing up.

Despite giving up lacrosse last summer, and his brother earlier than that, both Ritchies received invitations to Canada’s national under-19 field lacrosse tryout camp in November. They declined because of their hockey commitments.

Nick says he made the difficult decision last summer to set aside lacrosse to pursue hockey. He’s accepted he may never play the sport again.

“I played lacrosse since I was four or five years old and played it all the way up for Orangeville,” said Ritchie, after practice Wednesday as the Petes prepare to host the Kingston Frontenacs 7 p.m. Thursday at the Memorial Centre. “Lacrosse is the biggest sport in Orangeville. Most guys play and all young kids start playing. We have pretty much the best junior A team in Ontario.”

Ritchie said hockey holds greater opportunities than lacrosse which is why he decided to commit fully to it.

“Hockey is definitely my favourite sport and it’s always been my dream to play in the NHL,” he said. “Lacrosse is a pretty rough sport and training for hockey is more important. I’m probably never going to play lacrosse again. It was definitely a tough decision.”

Petes’ coach Mike Pelino thinks Ritchie is well on his way to realizing his NHL dream. At six-foot-two, 207 pounds he has the size scouts covet and sits sixth in OHL rookie scoring with 12 goals, 30 points and 50 penalty minutes in 52 games. He is second only to Max Domi in scoring among 1995-born players. With a December birthday, Ritchie, 16, isn’t eligible for the NHL draft until 2014.

“Nick has had a very impressive progression into becoming a real solid power forward,” said Pelino. “He’s able to contribute offensively. He’s continued to learn the game to give him the assets to be a complete player. He’s definitely been impressive from a physical standpoint.”

Pelino said Ritchie has been used in key situations and responded well. He says improving his focus and mental skills, in games and practice, is the biggest challenge he’s put to Ritchie.

“I’d like to see him take the attitude that he wants to be the best player on the ice every game. That whoever he is playing against, he wants to be better than them,” said Pelino. “When that desire becomes second nature, that’s what allows a player to take off. I think he has the potential to be a top, top pick in his NHL draft year and to be an outstanding NHL player.”