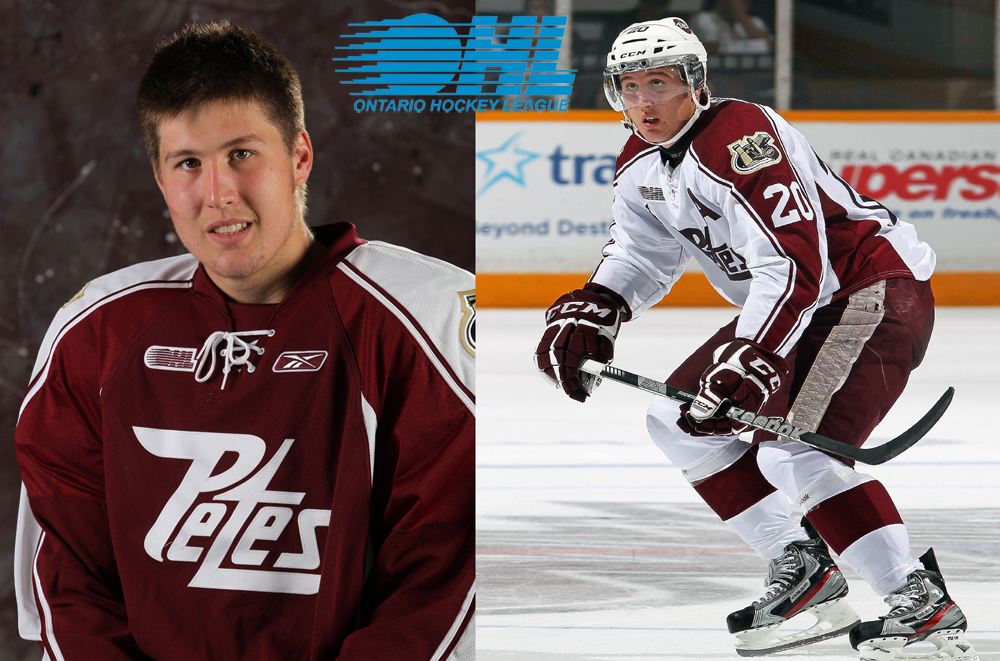 The Ontario Hockey League today announced that 2014 NHL Draft prospect Nick Ritchie of the Peterborough Petes is the OHL Player of the Week for the week ending February 9 after scoring six goals and two assists for eight points in four games played with a plus-minus rating of plus-5, as well as a shoot-out goal in Peterborough’s 4-3 comeback win against the Oshawa Generals on Thursday.

Ritchie tied a franchise record becoming just the third player in Petes’ history to score five goals in a game on Friday night despite a 7-6 shootout loss to the Kingston Frontenacs.  He also added an assist to finish the game with a career-high six points receiving second star honours in a contest where the Petes battled back after trailing 4-1 in the first period.  Ritchie’s five goals ties Bill Gardner (Nov. 22/79) and Doug Evans (Oct. 20/83) in the Petes’ record book and is also the first five-goal performance in the OHL since Nick’s older brother Brett Ritchie scored five goals last season with the Niagara IceDogs on November 4, 2012, to also claim OHL Player of the Week honours.  This week Ritchie also scored a goal and earned first star honours in the Petes’ 4-3 win over the Ottawa 67’s on Tuesday, then picked up an assist and tallied in the shootout as part of a 4-3 win over the Oshawa Generals on Thursday before being held pointless on Sunday in a 4-0 loss to the Generals.

Ritchie, an 18-year-old from Orangeville, ON, is playing in his third OHL season with the Petes after being chosen second overall in the 2011 OHL Priority Selection.  This season Ritchie has produced career-high offensive numbers with 29 goals and 27 assists for 56 points in 46 games.  Eligible for the 2014 NHL Draft, Ritchie was ranked seventh by NHL Central Scouting in their Midterm Rankings and participated in the BMO CHL/NHL Top Prospects Game last month as a member of Team Cherry.

Also considered for the award this week were a pair of Guelph Storm teammates including Winnipeg Jets prospect Scott Kosmachuk who had 10 points in three games with four goals and six assists, and Toronto Maple Leafs prospect Matt Finn who picked up nine points in three games scoring twice with seven assists and a league-high plus-minus rating of plus-11.  In goal, Devin Williams of the Erie Otters won both of his starts including a shutout victory posting a goals-against-average of 1.00 and save percentage of .962.