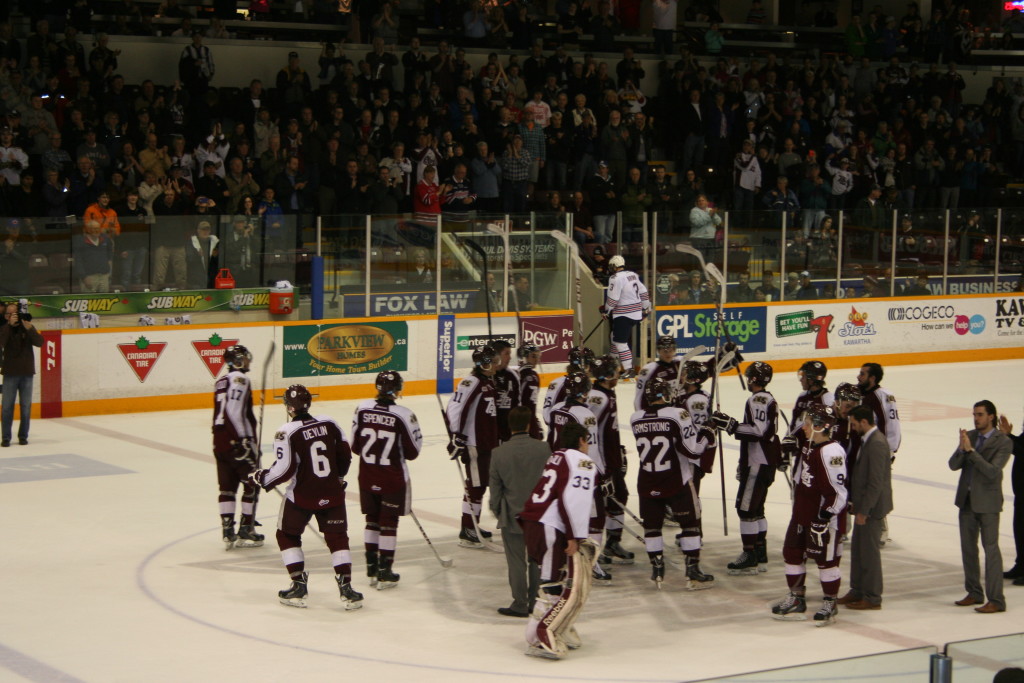 The Peterborough Petes looked to take the first step down an historic path as the rival Oshawa Generals travelled to the Peterborough Memorial Centre on Thursday night for game 4 of the Eastern Conference Semi-Finals. With a win, the Petes would be en route to become the first team in recorded hockey history to successfully come back from two consecutive 0-3 playoff series deficits. The Petes couldn’t muster any more magic in game 4, though, as Oshawa battled their way to a 5-2 win.

Early in the first frame, Peterborough got things off to a great start as Clark Seymour ripped the puck from point, beating Daniel Altshuller to put the home team up 1-0. Josh MacDonald and Eric Cornel picked up assists on the goal just 1:19 into the first in front of a record 3,993 fans.

Oshawa was quick to respond in the opening frame, though, as Justice Dundas caught the Petes on a bad line-change, feeding Jacob Busch for his second of the series from the right wing. The action was back-and-forth through the remainder of the first frame, with the teams trading big chances and even bigger hits.

After killing off a late-period 4-on-3 Peterborough powerplay, it was Oshawa’s turn to score an early-period marker. Cole Cassels was awarded the goal after banging in a rebound, assisted by Michael Dal Colle and Chris Carlisle at 2:01.

Much like the Gens did in the first period, Peterborough rebounded just minutes later. Hunter Garlent knocked the biscuit in the basket after the five-minute mark, drawing helpers from Nick Ritchie and the banged-up Josh MacDonald. Less than a minute later, though, Dal Colle found Mitchell Vande Sompel who banked the puck off a few sticks and past D’Agostini to put Oshawa up 3-2.

With 10:20 on the clock in the second period, Bradley Latour gave the Generals some early-game insurance scoring from the circle assisted by Chris Carlisle. The latter half of the stanza was once again an even tilt, with Peterborough unsuccessful on a 5-on-3 and Oshawa unable to add to their lead as D’Agostini shut the door repeatedly. Oshawa took their 4-2 lead, and 27-24 shot advantage into the second intermission, with Petes fans looking for yet another maroon and white miracle.

Peterborough couldn’t continue the magic in the third period, though. Daniel Altshuller was as sharp has he needed to be as the visiting Gens sat back and defended their lead, ultimately adding an empty netter from Bradley Latour assisted by Dylan Smoskowitz to finish the Petes’ historic playoff run.

Petes overagers Andrew D’Agostini, Clark Seymour, and Nelson Armstrong were named the first, second, and third stars of the night, with Hunter Garlent earning Mark’s Work Wearhouse Hardest Working Player of the Game honours. Remember to follow the Petes on Twitter, Facebook, and Instagram in the off-season for the latest news, updates, and contests!