Truth and Reconciliation in Hockey Resources 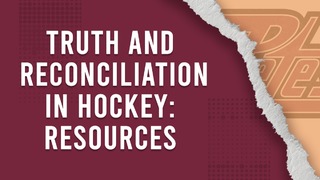 The Peterborough Petes understand that sport can be a vehicle for change, and know that hockey, much like Canada, needs to take action in reconciling the colonial violence it has perpetuated. Below are a list of educational resources our organization is leaning on, in the actions steps toward Truth and Reconciliation. We encourage Petes fans to join us in this important work.

Whether during National Indigenous History Month in June (and National Indgenous Peoples Day on June 21), or National Day for Truth and Reconciliation (e.g. Orange Shirt Day, September 31), or at any other time, we encourage our fans to check out the links below – simply click on the name of the resource to access it.

Warning: The content below contains details of residential schools that may be upsetting. Canada’s Indian Residential School Survivors and Family Crisis Line is available 24 hours a day at 1-866-925-4419.

What we are reading…

What we are listening to…

What we are watching…

Who we are learning from..